The Iranian regime’s war against the United States — and it is very much a war — has largely been fought by proxies for more than two decades.

The Iranian regime’s war against the United States — and it is very much a war — has largely been fought by proxies for more than two decades. The U.S. government considers Iran the world’s No. 1 state sponsor of terrorism.

Beginning just after the Iranian revolution in 1979, the regime began funding and directing terrorist groups such as Hezbollah to attack Americans, our interests and our allies. It has used Syria, Iraq and Lebanon, among other places, as recruitment markets and alternative battlegrounds in an attempt to weaken the United States and indirectly bleed out American resolve and resources.

Thousands have died, including hundreds of our Marines in Lebanon and troops in Iraq and Afghanistan. Iran continues to sponsor far-flung operations against the United States, including a recent plot to kill a Saudi diplomat in Washington. 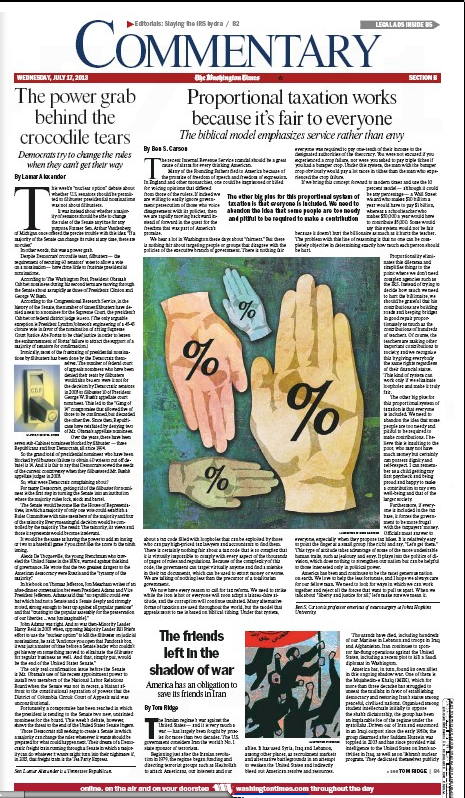 America has, in turn, found its own allies in this ongoing shadow war. One of them is the Mujahedin-e Khalq (MEK), which for more than three decades has struggled to unseat the mullahs in favor of establishing democracy and restoring Iran’s status among peaceful, civilized nations. Organized among student intellectuals initially to oppose the shah’s dictatorship, the group has been an implacable foe of the regime under the ayatollahs. Driven out of Iran and ensconced in an Iraqi outpost since the early 1980s, the group disarmed after Saddam Hussein was toppled in 2003 and has since provided vital intelligence to the United States on Iran’s activities in Iraq, as well as on Tehran’s nuclear program. They dedicated themselves publicly to a “secular, democratic, non-nuclear Iran.”

The MEK has paid dearly for its opposition to the Iranian regime. Tens of thousands of its supporters were sent to the gallows by the ayatollahs. Their unarmed base in Iraq — a self-styled city known as Camp Ashraf — was ambushed twice by Iraqi forces at the behest of Iran, killing and wounding hundreds. In 2012, they were moved to a temporary location in Iraq, a former U.S. Army base known as Camp Liberty, where they have already been lethally attacked this year by rocket fire.

Despite promises of protection given by the United States in exchange for the group disarming and surrendering its weapons of self-defense, the U.S. has ignored its members’ perilous plight. They remain refugees — hunted by the mullahs, abandoned by United Nations peacekeepers and ignored by the United States, which has forgotten its promises — awaiting their fate.

Even the most hardened practitioners of realpolitik would not condone the “love ‘em and leave ‘em” attitude the United States has shown toward the MEK. Our goal in Iran is much more than counterterrorism or nuclear roll-back. It is, inexorably, regime change. Some of the democratic forces that have helped topple despots across the Middle East in recent years are brewing in Iran, and a day will come when one of the world’s most violent and repressive regimes finally collapses.

A brilliant new book by a former U.S. policy official and arms negotiator, Lincoln Bloomfield Jr., looks at how the United States has by design and default kept a committed regime opponent and potential democratic ally in Iran sidelined, and is keeping Tehran’s day of reckoning at bay.

In “The Mujahedin-e Khalq: Shackled by a Twisted History,” Mr. Bloomfield brings the MEK out of the shadows, revealing a lazy consensus among members of the Washington establishment that the MEK weren’t a “legitimate” opposition group worth defending. It also lays bare a dangerous game of kick-the-can by Democratic and Republican administrations alike, who delayed and deferred a decision to repatriate the exiles to safe havens outside Iraq, resulting in dozens of needless deaths.

There is an interesting double play in the title of Mr. Bloomfield’s book. The “twisted” history of the group will be taken by some as a reference to the widespread perception of the MEK as a “cult,” but it is the history and narrative of the group itself that has been twisted beyond recognition, mostly by Iranian state propaganda, including use of intelligence agents in the West actively spreading the “cult” label against them. During the Clinton administration, the group was placed on the U.S. State Department’s list of “Foreign Terrorist Organizations” at the behest of Tehran. Despite not meeting any of the congressionally mandated criteria for what constitutes a terrorist group, the MEK languished on the list for nearly 15 years, drained of support and aid and suffering as an unsympathetic target for Iranian assassins. The listing was a major blow to the democracy movement in Iran and a shameful disservice to the group’s intentions, capabilities and sacrifices.

Branded terrorists and cultists by regime propaganda, the MEK members have been massacred, isolated and dehumanized during their long Iraqi encampment. Sadly, the U.S. media bought the Iranian regime’s pretext lock, stock and barrel, ignoring the dissidents’ plight in their desert redoubt even as they provided the United States with the precise whereabouts of previously unknown Iranian nuclear activities.

In September 2012, the group was at last removed from the foreign terrorism list after the U.S. Court of Appeals for the District of Columbia Circuit rebuked the secretary of state for an “egregious delay” in making a decision that had been a slam dunk factually and legally. But 3,200 of its members continue to languish in prisonlike conditions inside Iraq, where they remain in mortal peril. Mr. Bloomfield argues that it is not too late for the United States to redeem itself and acknowledge its legal obligations as well as the contributions of the MEK by bringing them to safety. The Obama administration should delay not a moment longer.

Tom Ridge was the first secretary of homeland security and is a former governor of Pennsylvania.