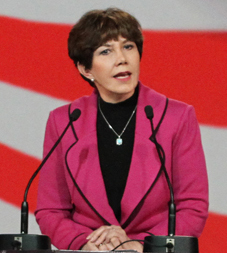 I am going to be the master of this especially important conference. I am very familiar with this body having served for 4 years as a U.S. expert to the UN human rights sub-commission.

We are here to discuss the massacre which occurred on September 1st, 2013. It has been more than six months since 52 people, 46 men and 6 women, were systematically subjected to extrajudicial massacre in Camp Ashraf.  We have had extensive testimony from witnesses who were there and present during the attack which included more than 120 uniformed soldiers who came into Camp Ashraf and systematically went house to house bringing about the residents, putting them in a central place, handcuffing them, and then executing them with shots to the head and to the neck. We have photographs of this occurrence. We have video tapes representation and we have the actual witnesses who saw this attack. Despite this abundant evidence, the response of the international community has been mostly silence. Yet some governments including my own government in the United States have condemned the killings, the United Nations has expressed its horror at what took place. But there has been no systematic call for an investigation by an independent group that could in fact assess who it is that committed these crimes and seek some forms of justice for those who killed innocent man and innocent women in what has been a modern tragedy and massacre.

The Iraqi government that is responsible for the safety of those in Camp Liberty and for those who were in Camp Ashraf has first deceived then dissembled and finally lied about what took place. They claimed at first that these deaths occurred as a result of explosions within the camp, some sort of natural disaster within the camp, then they claimed that in fact the massacre occurred as a kind of retribution from the residents who still remained in the camp. They were unwilling to acknowledge their complicity and in fact without their direct contribution these massacres could not have taken place.

For those of you who are familiar with the situation in Iraq and the situation surrounding Camp Ashraf, it is essentially a camp that is surrounded by the Iraqi military. No one goes in and no one goes out without the knowledge of Iraqi government and without permission of the Iraqi government. So, it is simply credulity to claim that the Iraqi government didn’t know what was happening. The conference today is here to dispel these lies and to hold accountable and those who sincerely care about human rights to come forward and to demand that the United Nations live up to its charter, that the United Nations human rights commission do what is required of it, which is to bring justice to the 52 innocent men and women who were taken. Little can be done for the deaths except to bring justice to them and to their families. Nonetheless, there are nearly 3000 more innocent victims who are kept in what is essentially a detention center in Camp Liberty. These individuals remain under constant threat. There have already been numerous attacks with the killing of more than 100 people that have been launched against Camp Liberty, there have been mortar attacks from the outside and those who live within the confines of Camp Liberty are under constant daily threat. They are denies even the most basic human rights. We have learned this morning from those who have knowledge of what is going on in Camp Liberty that even the basic delivery of food stuff has stopped within the last two weeks in Liberty. Those who are inside are in desperate need of our help. We must assure that humane conditions are provided in Camp Liberty. But more importantly, we must assure that those who are in Camp Liberty have the basic freedom to leave if they choose, to leave and go to the country of their choosing.

What is needed in order for these steps to take place is an independent investigation of what has been going on in both Camp Ashraf and Camp Liberty. The office of high commissioner for human rights has called for an independent investigation and then nothing. The government cannot under any circumstances be the body that investigates this massacre. As I have said, we have ample evidence just by the fact that this is essentially an area that is controlled entirely by the Iraqi military and nothing could take place either in Camp Ashraf or today at Camp Liberty without involvement of the Iraqi government. The government therefore cannot be the body to investigate what has taken place. There has been no investigation of the attacks that occurred in July 2009 or April 2011. The failure to independently investigate those attacks was directly responsible for the attack occurred on September 1, 2013.

All of this takes place against the back top of continued human rights violations in the country of Iraq. Today we will hear from a distinguished panel of experts and they will be able to you in more detail what has occurred and to ask for your help. because without your help, without an outcry from those in this room who believe in the principles of human rights, who believe in the principles that every individual is to be protected and their human rights observed, no justice can take place and further bloodshed will come about.