On October 10, two explosive-laden drones launched by Iran-aligned Houthis towards Saudi Arabia were intercepted and destroyed by the Saudi-led coalition backing Yemen’s internationally recognized government. This attack is the latest instance of the Iranian regime’s hostile acts in the Middle East—but it will not be the last.

In recent years, Iran’s Revolutionary Guards (IRGC) has frequently performed terror acts, mostly through its proxies. Since the beginning of their rule in Iran, the mullahs immediately shaped extremist groups inside the country and abroad by recruiting thugs in every locale.

They expanded their reach across the region via Lebanese Hezbollah, Shiite Iraqi militias, Yemeni Houthis, and other radical groups in Bahrain, Saudi Arabia, and Kuwait. They also hired several groups to carry out their goals in Palestine. Furthermore, they have strong ties with the Syrian dictator Bashar al-Assad, and Assad has given a blank check to IRGC commanders to do anything they want in Syria in exchange for helping him stay in power.

Who Is Abdulaziz Al-Mohammadavi, the New Head of Iran-Backed Militias in Iraq?

The mullahs spend billions of dollars to interfere in the affairs of neighboring countries while most of Iran’s population suffers from rampant poverty. In Iran, around 60 million citizens live below the poverty line. The national currency’s value has sharply declined, and essential goods and even foodstuffs have become scarce.

In a televised interview on September 26, Deputy IRGC Commander Ali Fadavi confirmed that Iran spent $19.6 billion on the 1980-1988 war with Iraq and added, “the cost for Iran’s regional policies—on such things as proxy armies and military aid in countries like Syria, Iraq, and Yemen—was less than that.”

Iranian authorities, particularly IRGC commanders, never tell the whole story unless the undeniable evidence and facts push them to admission. For instance, from January 8 to 11, they denied the IRGC’s role in downing a Ukrainian airliner in Tehran. However, the facts provided by the U.S., Canada, and Ukraine compelled the IRGC Aerospace Commander Amir-Ali Hajizadeh to admit that an IRGC anti-aircraft system had targeted the plane and killed all 176 people on board.

Tehran sees radical groups as an instrument to consolidate its power in the region. In this context, the mullahs have never reduced their aggressive behavior in the region. Simultaneously, they advance two different goals from fueling warmongering and terrorism beyond.

First, they try to revive the spirit of their forces and the few loyalists they still have in Iran. Second, they send a message to the protesting society, pretending they rule as a regional power. Indeed, they cover-up amassed and unresolved crises inside Iran by trying to amplify their hegemony outside Iran’s borders.

However, today, this policy is questioned even by the mullahs’ social base. “Several citizens question why we must meddle in other countries’ affairs while we face enormous troubles at home?” IRGC Senior Spokesperson Abolfazl Shekarchi was asked in a televised interview on September 21. “Defending ideological frontiers of the Islamic Republic… is the natural mission of the IRGC,” the IRGC commander responded.

Shekarchi’s remarks apparently showed that the interference in other countries is a fateful topic for the regime. In this context, the mullahs squander billions of dollars to support their proxies while they have left their own people without any support and pension against the coronavirus pandemic.

Therefore, not only the Iranian regime’s lifelines to support terrorist entities must be dried, but also the IRGC must be dissolved. Previously, the Iranian Resistance Leader Massoud Rajavi called on disbanding the IRGC due to its massive budget. He stressed that the Iranian people do not need an additional army. The IRGC’s budget must be allocated to the health department to counter the coronavirus crisis and to settle the unpaid arrears of medical workers.

If the ruling theocracy does not seek to engage in suppression, warmongering, and terrorism, one military would suffice. It should not burden the suffering and deprived people of Iran with the auxiliary costs of the IRGC.

This message was welcome among citizens and pushed IRGC commanders to hastily justify this entity’s existence. However, the Iranian people and supporters of the People’s Mojahedin Organization of Iran (PMOI/MEK) distributed the call for dissolving the IRGC in different cities and cornered the regime, particularly the IRGC.

Iran’s IRGC Reacts To Calls For Its Dissolve 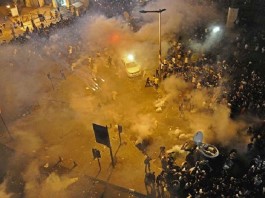 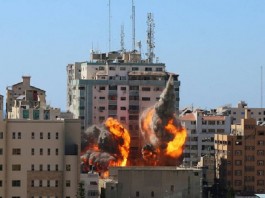 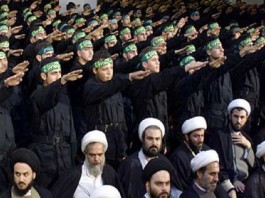