Over the past few months, the Iranian regime has been implementing its so-called “Internet Protection Bill,” to intensively restrict people’s access to the online world of free information and disrupt the connection between the Iranian Resistance and the rest of society. Since this plan became public, the Iranian people have consistently confronted this decision.

The regime has been in a rush to implement its decision, and throughout this process, officials have continued to pass the issue to each other, as though they are playing with a ball of fire, to shirk any responsibility. This is because they know that they will have to deal with the consequences of this decision in the near future.

To prevent public backlash, regime officials are trying to implement this plan in secrecy. This bill became known to the public after the regime’s media discussed the provision of ‘silent protection’. According to leaked information, and several confessions by the regime’s officials, two phases of this plan have already been implemented behind closed doors.

So far, the regime has slowed down the internet significantly. Abbas Abdi, from the regime’s so-called reformist faction, predicted this action in February 2022 and warned the regime’s current officials about the social and economic consequences of their actions.

The state-run Hamshahri Online website confirmed the slowdown in its February 21 publication, and wrote, “Internet speed is so annoyingly slow that in February, the world ranking of Internet speed in Iran fell 7 steps because they prevented the monthly increase in capacity. The slowness of the Internet is the result of the silent implementation of the protection plan before the law was passed.”

This action has created countless complications for the country’s education system. The same thing is happening to people’s occupations and businesses, especially since the regime has now restricted access to social networks. Adding to the slowness of the internet, the second part of the regime’s plan is to increase the prices of internet packages.

Even though the people have reacted negatively to this decision, the regime, which has implemented this plan as a security measure, still chose to increase the prices. This move is likely to hurt many people as, according to the regime’s latest official statistics, most people in Iran live on the horizon of the poverty line, or under it.

In recent days, Mohammad Javad Azari Jahromi, who served as the regime’s Minister of Information and Communications Technology in the administration of Hassan Rouhani, reacted to comments made by the regime’s Friday Prayer leader of Isfahan who had said that people who did not fast during this year’s Ramadan period would face harsh consequences.

Jahromi said, “Many people who have nothing, are not able to fast. Disturbing is not such a difficult thing but providing a living for the people has difficulties.” 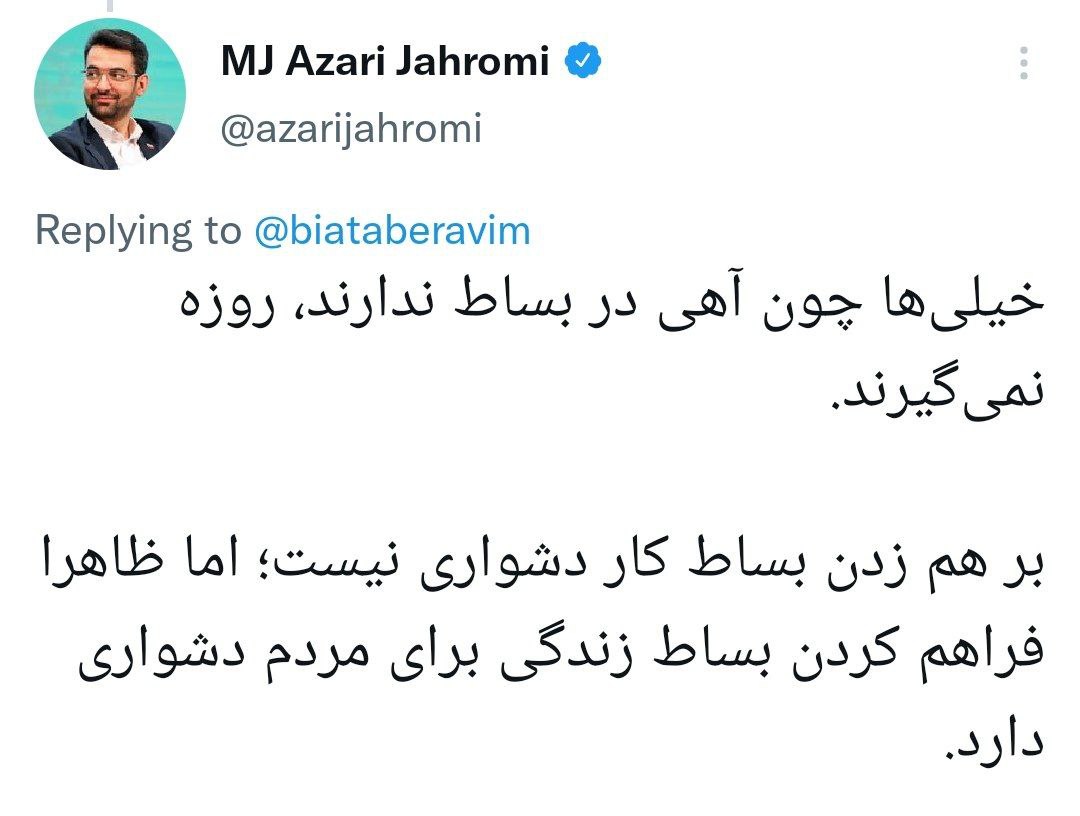 There have been suggestions that the Ministry of Communications has allowed some Internet companies to increase the price of their internet packages by up to 100 percent.

A member of the protection plan commission said, “The National Cyberspace Center, the Ministry of Communications, and other government agencies agree with the new draft plan and have acknowledged this fact in internal meetings of the commission and have agreed to the plan.”

The final objective of the regime, regarding the implementation of this plan, is to reestablish its control over the internet. The regime’s supreme leader Ali Khamenei has expressed his frustration publicly many times lamenting that the regime has lost control over cyberspace and that the people have so much freedom of access to information.

It is apparent that this is a big mistake that Khamenei is taking, and the winner of such oppressive plans can only be the people. The effects of the plan will be contrary to the regime’s objectives and will likely pave the way for more protests.