At 1:30 AM on Thursday, intelligence against stormed the homes of two members of the Free Union of Iranian Workers, arresting Jafar Azimzadeh and Jamil Mohammadi, both of whom had asked workers to rally in front of the Ministry of Labor that day.

The government had predictably denied permission for such a rally. Additionally, officials attempted to contain public sentiments inside of a government-created event, ostensibly in celebration of Iranian laborers. Taking place in a 12,000 seat stadium, the event featured a speech by president Rouhani, disallowed self-made placards and banners, and instead displayed pre-approved slogans and images.

In spite of these efforts at subsuming worker voices, many people defied the restrictions, both inside and outside of the government-sponsored event. Inside, they held their own placards in order to protest low wages, arbitrary firings, cuts to housing and retirement benefits, and excessive raises for executives. 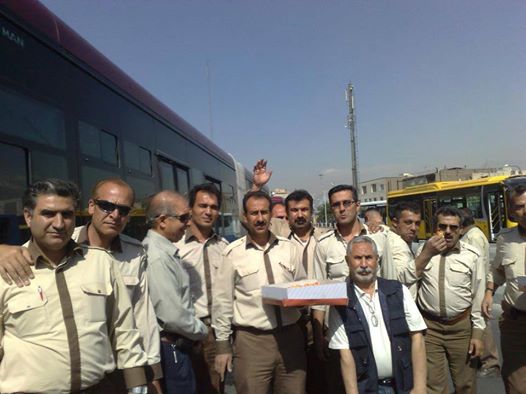 Outside of the Ministry of Labor, government officials set up a barrier of intelligence agents and security forces in an attempt to prevent people from assembling on or near Azadi Avenue. Persons on the scene reported the presence of armored vehicles as part of the operation. In spite of all of this, numerous individuals, led by transportation workers, were committed to assembling in support of their message, approximately 1,000 of whom were able to reach Azadi Square.

The protest reportedly was entirely peaceful, with several Tehran bus drivers attempting to use the occasion to give out flowers and cookies to potential supporters of their cause. Nevertheless, security forces arrested 23 participants in a move that labor activist Davood Razavi described as proof that the Iranian government refuses to tolerate even a small amount of dissent.

The arrested individuals were seen to be beaten and verbally abused before being transferred to Tehran’s Evin Prison, which houses a large number of Iran’s political prisoners.

The transportation workers’ rally in Azadi Square was only one of several events that took place on May 1 in spite of government repression. Workers from Ahwaz Pipe Factory marched on the governor’s office and were surrounded by security forces. Members of the textile and bakers unions gathered in Sanandaj, leading to several arrests. Workers rallied in Khorramabad, but all images of the event were suppressed by government forces.

Only in Qom was the Intelligence Ministry able to effectively suppress all efforts at staging demonstrations. In a letter to factory managers and business owners, it warned against shutting down operations and instructed them to summarily fire anyone who attempted to demand time off to coincide with International Workers’ Day.

Outside of the country, labor rights activists and student groups used the occasion to renew demands for the release of the activists and other political prisoners already serving sentences in Iran.