On Monday, supporters of the Iranian Resistance, in a rally, marched in support of the nationwide uprising to overthrow the Iranian regime, and announced to the international community to send an international investigation panel to Iranian prisons and prevent the massacres of the detainees.

The Iranian regime’s Supreme leader Ali Khamenei has described the protests as the work of a “very dangerous conspiracy”. The Tehran government has blamed the uprising on rebellious youths linked to opponents in exile, mainly the People’s Mojahedin Organization of Iran (PMOI/MEK).

#Iranians in #Paris have gathered to call on the international community to put pressure on the dictatorship ruling #Iran to #StopIranBloodshed #FreeAllProtesters #IranProtests #MEK pic.twitter.com/jHC3lAasYm

“I salute you all who have found a defense of freedom and democracy and defense of human rights in supporting the Iran uprising.
“The blood of over 600 rebellious youths, the cries of 12,000 arrested youths detained in Khamenei’s torture chambers, and the cries of a rebellious nation from across Iran call on the world to stand up to the religious fascism.

“They cry out: We shook the earth underneath the decadent rule of the mullahs in 187 cities.
“They say: We paid a heavy price to prove that there remain no other options but to overthrow the mullahs.”

Mrs. Rajavi called on the international community to stand firmly in front of the Iranian regime, and to condemn the gross violation of human rights and the crimes against humanity:

“As we approach December 10, the anniversary of the adoption of the Universal Declaration of Human Rights, the people of Iran expect the world community to take a practical step vis-à-vis the suppression of human rights in Iran by pressuring the mullahs’ regime to stop torture and killings of those arrested in the Iran uprising.

“The European Union must stop its appeasement of the clerical regime. No concessions should be granted to a regime that slaughters protesters and breaches its commitments to the JCPOA, one after the other. The EU must pull the trigger of UN Security Council sanctions against this barbaric dictatorship which is a threat to global and regional peace and security.

“For their massive suppression and bloodshed, the UN Security Council must declare the Iranian regime leaders as criminals committing crimes against humanity and hold them accountable.”

In this regard, Mrs. Rajavi tweeted:

Unfortunately, the int’l community has not responded properly to the crimes against humanity currently going on in #Iran. Crime against humanity during the November 2019 uprising is being led by the same officials responsible for the 1988 massacre. #IranProtests

“No concessions should be granted to a regime that slaughters protesters and breaches its commitments to the JCPOA, one after the other.

“Unfortunately, the int’l community has not responded properly to the crimes against humanity currently going on in Iran. Crime against humanity during the November 2019 uprising is being led by the same officials responsible for the 1988 massacre.”

In the rally, supporters and friends of the Iranian people and resistance emphasized their solidarity with the people of Iran, especially the rebellious youths. 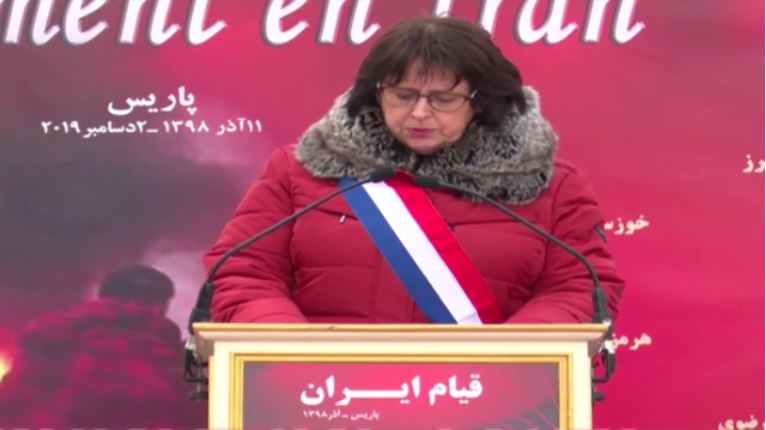 Mrs. MichèledeVaucouleurs, the member of the French Parliament, condemned the repression of protesters on behalf of the Parliamentary Committee for a Democratic Iran (CPID) and emphasized, “We are all here to support the Iranian people who have only one aspiration: freedom.” 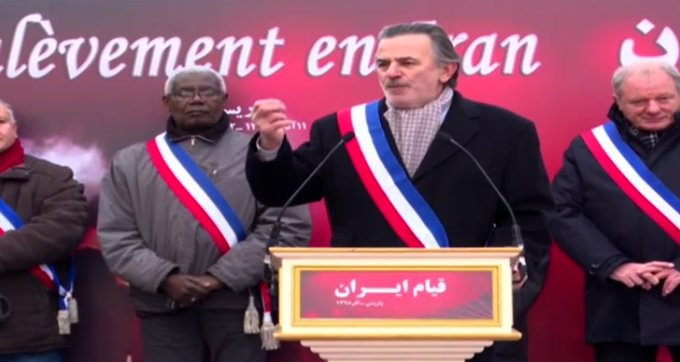 Jean François Legaret, Mayor of the 1st arrondissement of Paris, said: “The Iranian people are oppressed and they have no other resolve than to revolt. The number of victims increases day by day and over 12,000 protesters have been arrested.

“The masks have fallen, no to Rouhani, he is not a moderate. We cannot negotiate with a barbaric regime … Those who have committed crimes against humanity must be brought to justice.” 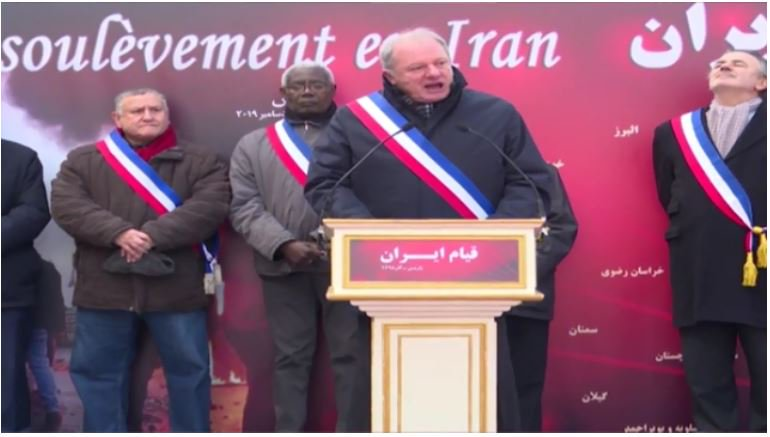 Jean-Pierre Muller, Mayor of Many en Vexin, said: “The massacre of the Iranian people must stop. Urgent action from the international community is needed to free all protesters.” 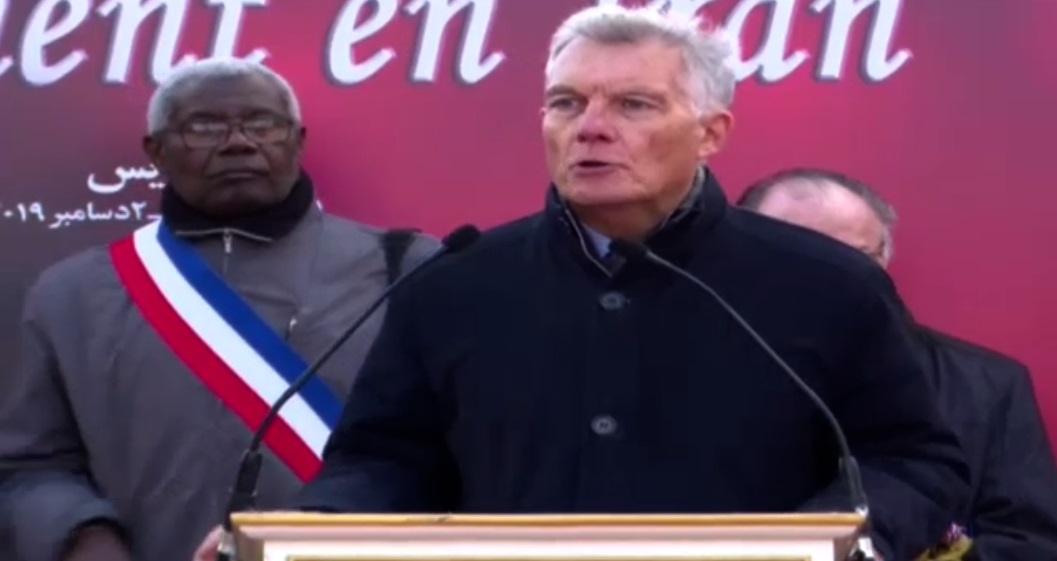 Jean Pierre Becquet, former mayor of Auvers Sur Oise, said: “The people of Iran are rising up. They’re paying a heavy price; how many have fallen? The fight for freedom is that of the Iranian people.” 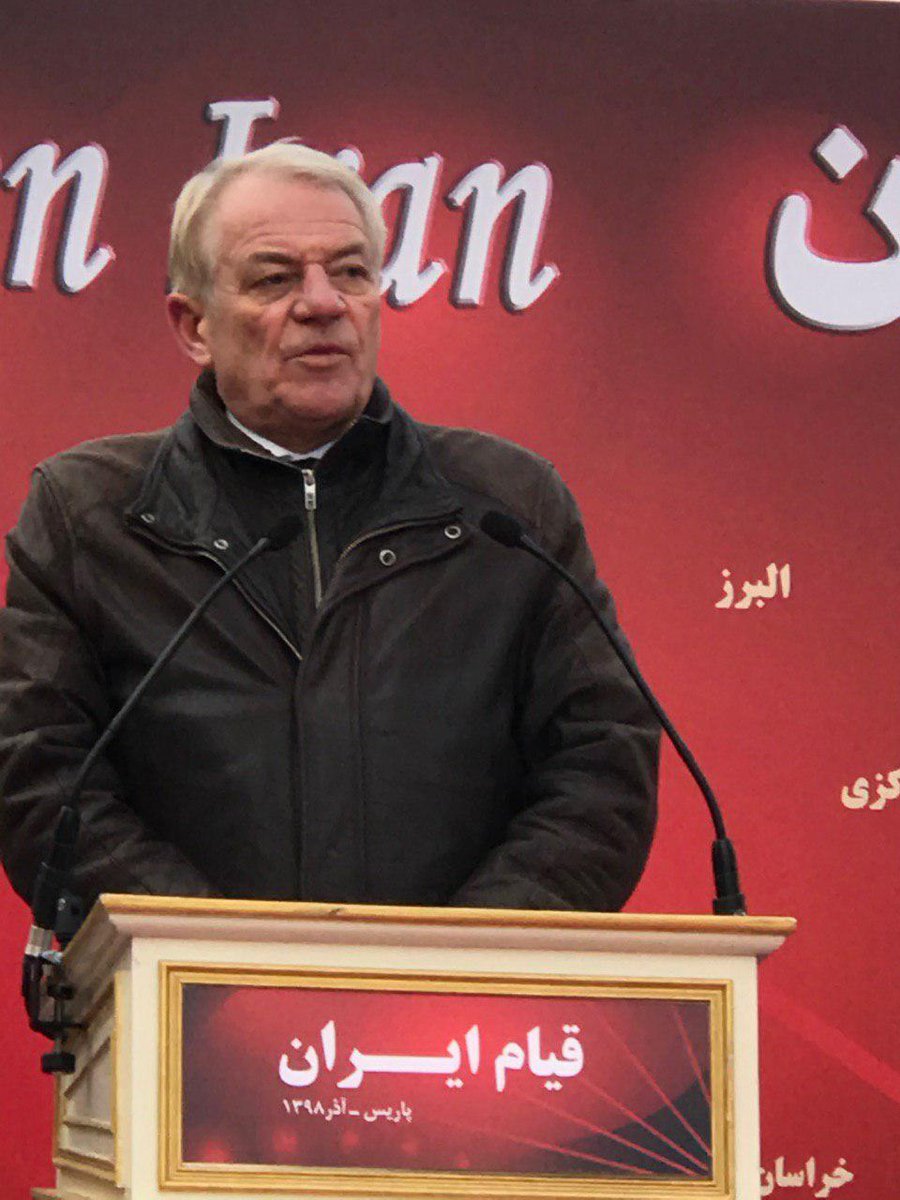 Former MP Dominique Lefebvre said: “The French government must make it clear that it must not negotiate with this regime as long as it does not respect human rights in Iran.” 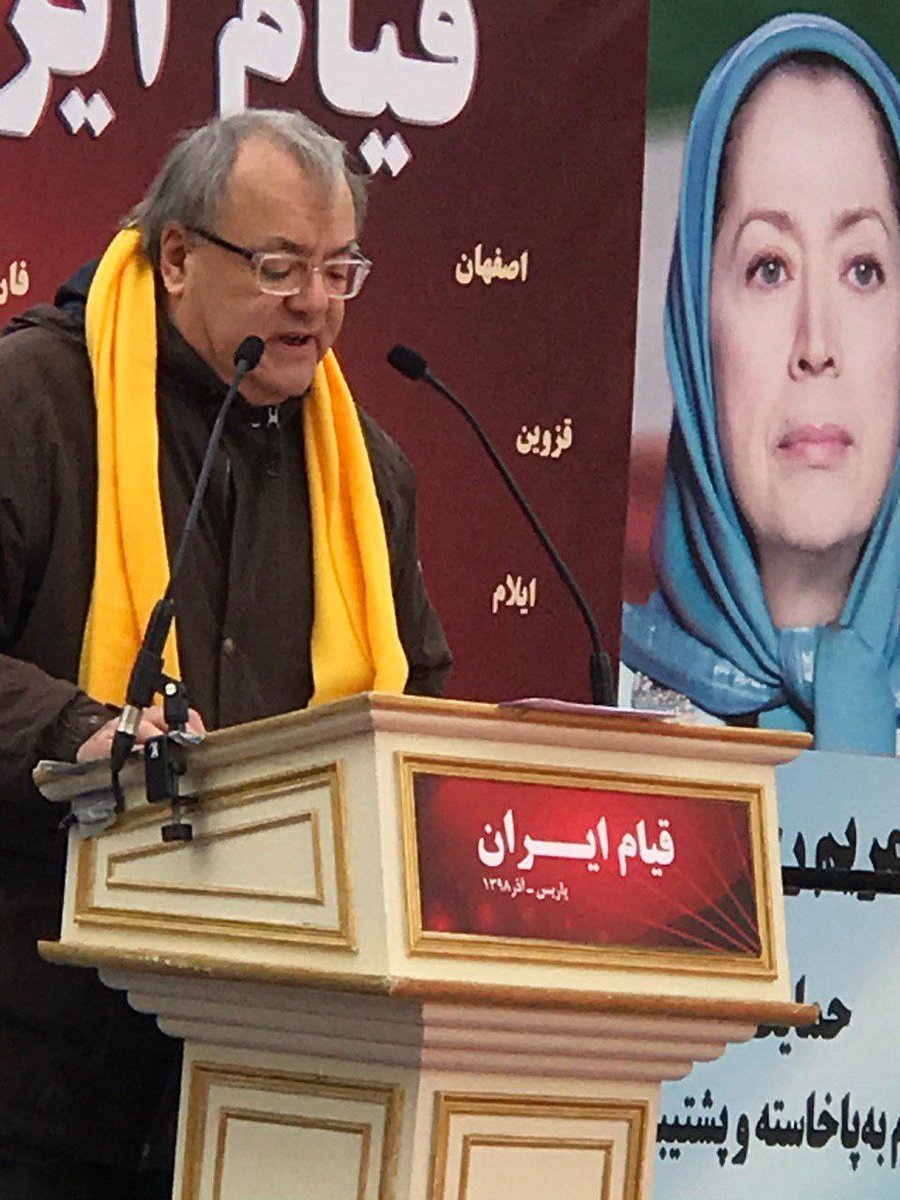 Human rights activist Gérard Lauton said: “We are here to support Iran protests and condemn the savage crackdown and demand an investigation to prevent the vengeance of this regime on arrested protesters.” 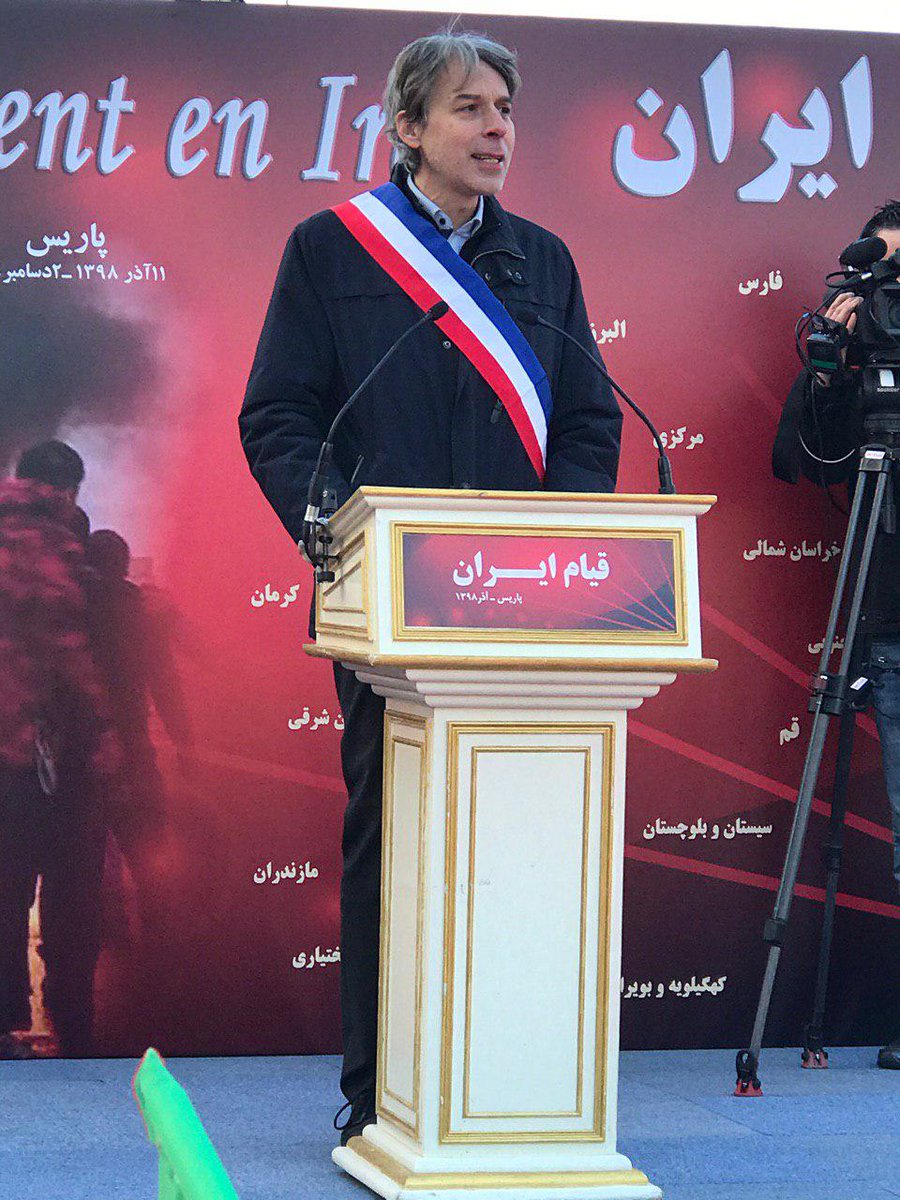 Jacques Boutault, Mayor of Paris 2nd arrondissement, said: “We are witnessing a new wave of the uprising by the Iranians. The mullahs are a destabilizing factor and the stabilizing factor is the return of democracy.” 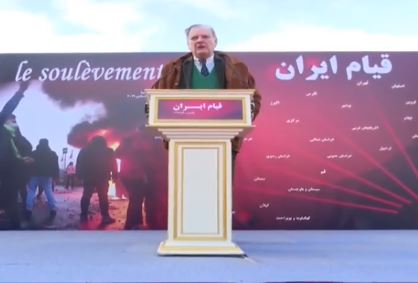 Pierre Bercis, president and founder of the New Human Rights organization, said: “We realize that what prevents the international authorities from taking action is the nuclear weapons rather than the Iran Protesters shot dead in Iran.”