Iranian officials have widely been criticized for the hypocrisy of using Twitter and Facebook to communicate with the outside world while those platforms are blocked for ordinary Iranians. And although Azari-Jahromi was once assumed to be reform-minded, he has overseen the continued increase of social media censorship.

Nonetheless, the State Department’s request did not take aim at these specific types of restrictions, which is routinely circumvented by tech-savvy Iranians using tools such as virtual private networks. Rather, the US urged Twitter and Facebook executives to isolate high-profile Iranians as a way of pressuring them to lift the overall blockage on internet connectivity that was put into place a week earlier, following the outbreak of massive protests throughout the country.

The demonstrations emerged in response to a government announcement concerning increases to the price of gas in the midst of a wide-ranging economic crisis. But the public activism soon took on a strongly anti-government tone, panicked of their possible overthrow the authorities resorted quickly to brutal crackdowns and there were reports of heavy clashes between security forces and the protesters. The People’s Mojahedin Organization of Iran (PMOI, Mujahedin-e Khalq or MEK) “Resistance units” played a key role in leading protests.

The Iranian regime cut off internet access in its entirety, for limiting the people’s ability to organize protests and inform the world about Tehran’s abuses. Recognizing this latter effect, US Secretary of State Mike Pompeo also issued a statement addressing the Iranian people directly and appealing to them to share photographs and videos from street protests once the internet began to come back online.

The process of reconnection reportedly began even before the State Department issued its statement incentivizing the regime’s social media users to lift the blockage. But as of Monday, cybersecurity firms were still reporting the mobile internet remained out all across Iran. Consequently, it remains virtually impossible for Iranians in areas of serious unrest to report directly from the streets. But in accordance with Pompeo’s public requests, information has begun leaking out via landline internet connections, thus substantiating preliminary accounts of the Iranian regime’s crimes against humanity.

The Associated Press has reported, for instance, viewing videos that depict Iranian authorities opening fire on crowds with machine guns, firing at protestors from rooftops, dragging individuals off the streets, and using motorcycles in attacks on marchers. Brian Hook, the US government’s special envoy for Iran, reiterated the charge that Tehran had been using its control over the internet to conceal a tragedy involving large numbers of deaths. But despite the growing catalog of documentary evidence, Iranian officials continue to formally deny this.

Official reports in Iranian state media have never acknowledged more than a handful of deaths. Even then, the reports tend to portray security forces as victims of unprovoked attacks by “thugs” and “hooligans.” But within the first four days of demonstrations, Amnesty International was reporting that the death toll had already exceeded 100 as a result of attacks by the Islamic Revolutionary Guard Corps and the Basij militia. Amnesty further stated that the real figure might have been closer to 200, while the People’s Mojahedin Organization of Iran determined that 450 would be a conservative estimate for the number of deaths.

There have been similarly divergent estimates of the number of arrests. Iranian authorities placed that number at around 1,000. And while they admitted to threatening the supposed leaders of the protest movement with “severe punishment,” they also claimed to have released those who did not take part in vandalism of government buildings or counterattacks against “security forces”. But rights groups and political opponents of the Iranian regime have disputed this account as well as offering much higher estimates for the overall number of arrests.

The Center for Human Rights in Iran claimed that at least 4,000 people had been detained. And the PMOI, which maintains an extensive intelligence network inside Iran, determined that the arrests had exceeded 10,000 within their first week. It stands to reason that the various estimates will continue to be revised upwards as internet access returns and more information spreads among Iranian activists before leaking to the outside world.

In any event, the picture that has already developed is one of even greater government repression than has been deployed against earlier protests, including the nationwide anti-government demonstrations that took place over roughly a month at the beginning of 2018. The estimated number of deaths, in that case, ran only into the dozens, even though the protests had similar roots in growing economic anxiety and were characterized by similar anti-government slogans including “death to the dictator.”

In announcing the sanctions on Azari-Jahromi, the US Treasury noted that despite being praised by some reformists for his youth and his Western education, the Communications Minister formerly served as an intelligence agent and helped to spy on many of the opposition activists who now rely on the internet and social media in order to organize protests and other means of advocating for change. And speaking more generally about the role that Azari-Jahromi is expected to play for the regime, Treasury Secretary Steven Mnuchin stated, “Iran’s leaders know that a free and open internet exposes their illegitimacy, so they seek to censor internet access to quell anti-regime protests.”

Of course, the complete obstruction of the internet risks greater popular revolt. And as evidenced by the presence of Iranian officials on otherwise banned social media platforms, the internet is also recognized as an important outlet for regime propaganda. Both of these issues have likely factored into Tehran’s decision to begin reestablishing connectivity. The resumption of landline service notably coincides with the staging of pro-government counter-demonstrations, which Foreign Ministry spokesman Abbas Mousavi promoted as a showcase for “the real people.” 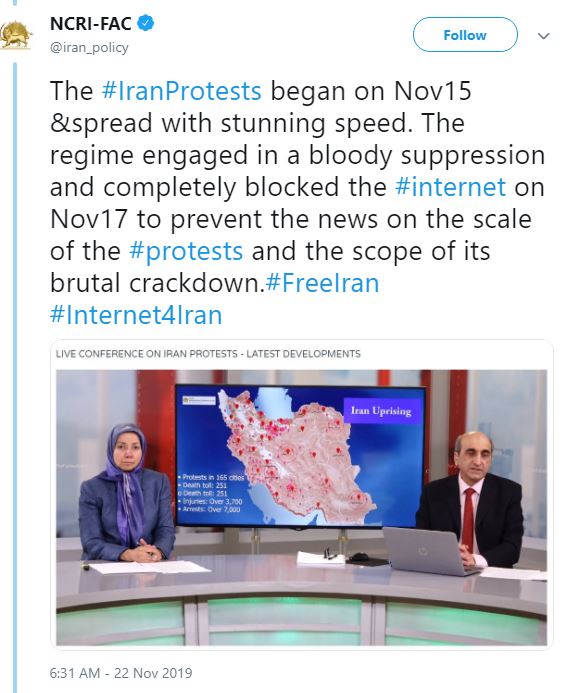 This comment served to reiterate the regime’s official narrative accusing foreign countries. But this claim is plainly refuted by the speed with which the protests emerged and spread throughout the country in the wake of the announced gas price hikes.

Rejection of Iran’s electoral process is a longstanding feature of some domestic activism. Months before the January 2018 uprising, the PMOI urged a boycott of the presidential election, suggesting that people instead “vote for regime change.” That organization was also credibly blamed for the subsequent protests, including those that occurred last week. But after cutting off internet access and stifling unrest, Tehran tried to downplay the national uprising.

Summary of Protests and Social Movements in Iran – August 2022