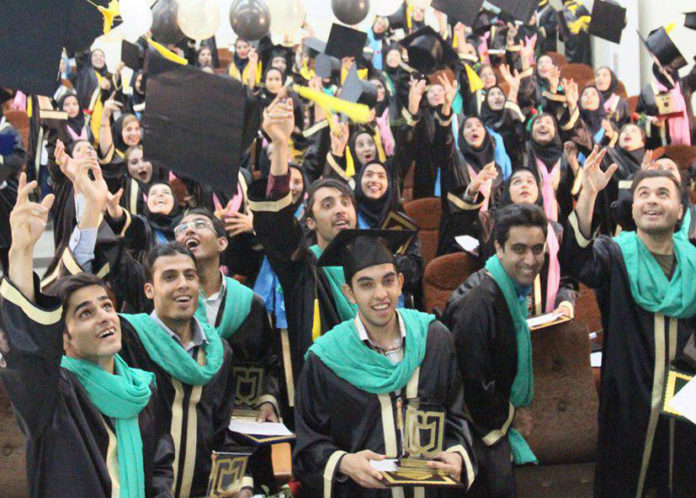 Iran’s unemployment is such that college graduates are happy to get work on construction sites, in bazaars, or really, any job. They are desperate to make ends meet. The regime’s own state-run media provided startling statistics, and displayed that this issue was about to explode and bring about changes to Iran’s political infrastructure.

In fact, a report was broadcast on Iranian state TV that showed interviews with ordinary workers who have earned PhDs or Master’s degrees, some of whom earned rankings in world-level competitions. Still, for such expertise, there is, sadly, a lack of employment in Iran. These scholars work as masons, security guards, and doormen.

A television ad seeking an individual with college education resulted in calls from some 300 people. The show aired the response of one young man who receives a return call informing him the position is a dishwashing job. When asked if he is still interested, the man, who has earned a Master’s degree, answers after a long pause. “Yes,” he says. Even when he realizes his words are being taped, he asks the reporter, “Can you help me getting hired somewhere? The Foreign Ministry, any embassies, state TV or radio… I have undergone the necessary training but I didn’t have any connections.”

The Kayhan daily, affiliated with the Iranian Supreme Leader Ali Khamenei, reported, “Three million people unemployed is the result of neglecting the production lines… The country’s unemployment figures raised from 3,203,398 at March 2017 to 3,366,973 in just three months.”

The Abrar daily cited an Iranian MP saying, “The country’s unemployment numbers are higher than the existing numbers.”

Economic expert, Ibrahim Razaghi, was quoted by semi-official Fars news agency, “We have 15 million people unemployed across the country,” he said.

Iran’s women face even more alarming circumstances. “Unemployment amongst women in their 20s has increased five-fold,” according to Ali Rabei, Iran’s Minister of Cooperatives, Labor and Social Welfare, who was quoted by ShomaNews.

The regime’s policy on imports is part of the devastation that has impacted domestic industry and agriculture. Kayhan Daily reports, “At least 30 of the country’s leading economic brands and factories, including Arj, Darugar, Azmayesh, Pars Electric, Isfahan Polyacril, Irana Tiles, Tabriz Car Manufactory, Istake, Isak Bicycle Manufactory, Varamin Sugar Cubes, Ghoo (Swan) Vegetable Oil, Ray Chipping and Iran Wood are no longer active. The end of these brands has led to the unemployment of around one million people in the past four years.” Kayhan adds, “Around 60 percent of Iran’s factories closing and the remaining 40 percent working at 30 percent capacity in the past four years on one hand, and the expulsion of 20 to 25 percent of factories working at 50 percent capacity have redoubled the troubles workers face in their daily lives.”

These numbers provide an understanding of how ordinary Iranians suffer from the importation of cheap goods.

Former presidential candidate Ibrahim Raisi has been cited as saying, “40 percent of our college graduates remain unemployed. The continuation of this trend, with more people losing their jobs, and the destruction of domestic production lines, has no end in sight.”

According to the Vatan-e Emrooz Daily, “Each hour around 150 individuals are added to the country’s unemployment populace. As a result, 3,600 people become unemployed with each passing day, 25,200 each week and 108,000 a month. In other words, each year around 1.3 million more people are seen without jobs.”

Sky News TV reported there is a fire simmering beneath the ashes.

The Iranian people spoke their minds during the recent uprising. They called out the billions spent on the nuclear program, and ballistic missiles. They denounced support of Syria, Lebanon, Iraq, and Yemen, while so many Iranians live in poverty. They criticized the fact that Kermanshah’s earthquake victims are still freezing, nearly three months after their lives were devastated, as homes built in state-backed projects came down. They reproached the regime’s human rights violations, including executions, torture, and the crackdown imposed on society.

The slogans that they chanted were specific — the Iranian people began a call for regime change.