Following the nationwide anti-government uprisings in December 2018 and November 2019, Supreme Leader Ali Khamenei talked of a “security” crisis for the regime and the chances that the mullahs would be overthrown.

The regime cracked down hard on the protesters, killing thousands, arresting tens of thousands, but while they might have stopped the initial protests, they couldn’t stop the movement. The state-run Resalat daily recently called these protests a “spark in the existing gunpowder warehouse”.

This is no passing protest over increased fuel prices. It was a rejection of the entire fascist regime. It won’t be forgotten just because the regime gunned down 1,500 people in the streets. Instead, it will be a national day in Iran’s history.

Let’s Look Back at the November 2019 Protests

The local protests over the tripling of gas prices quickly spread to over 160 cities and took on a firm anti-regime sentiment with calls for regime change echoing loud and clear across the country. The protesters attacked symbols of the regime’s theft from and suppression of the Iranian people, including police stations, security force cars, and motorcycles, Revolutionary Guards Corps (IRGC) bases, IRGC owned chain stores, seminaries, governor’s offices, banks, and offices of the heads of Friday prayers.

In fact, Mojtaba Zulnuri, the head of the National Security and Foreign Policy Committee, said that in just one day, protesters clashed with security forces in 800 areas, including 147 areas in Tehran.

Khamenei, terrified of losing power, orders his forces to do whatever it took to quell the protests, which led to 1,500 civilians being shot and killed in just five days, while 12,000 more were arrested; all during internet and mobile phone blockage designed to stop protesters communicating with each other or the outside world.

“The factors that led to Iran’s November 2019 protests have not faded and have actually increased and become more widespread. If the sudden rise in the price of gasoline could lead to huge angry protests across Iran, the current plight of Iranians, including the shortage of bread and water and severe price fluctuations have the potential to spark huge protests,” wrote the National Council of Resistance of Iran (NCRI).

They said that the regime is in a vastly different position than it was in November 2019, now “swamped” by a variety of economic, social, and political crises, especially as international sanctions have weakened the regime’s ability to fund proxy forces. This means that the next protests may be the last. 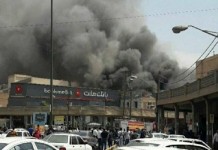 The Iranian regime has increased its oppression ahead of the anniversary of the November 2019 uprising in Iran in an attempt to counter possible...
Read more
Protests

The following is a summary of the protests that took place in Iran in October 2020. Despite the spread of the coronavirus throughout Iran, various...
Read more
Protests

Iranian Supreme Leader Ali Khamenei has once again spoken about his concerns of “security threats” to the regime in a speech complaining about the...
Read more
Go to mobile version