In examining the roots and the autopsy of the protests and uprisings, and the most recent of them, the November uprising, we always come to the rule of the supreme leader. We want to know the cause of this important issue that political groups, youth and the strata of the society were faced within the early years of the formation of this government in the last four decades.

Understanding this important issue is necessary because some still claim or believe that in front of the mullahs’ government, the people should not choose outlawed and violent ways. This opinion or belief or propaganda is hot these days and has been seen here and there in some media outlets.

A Favorite and common path

Before getting to the point, it is important to remember that in the social life that people, groups, and governments form, there is no better, easier, more desirable, less expensive, and more inclusive way to claim one’s rights than seeking peaceful, legal paths. This is the path that free societies and peoples with democratic governments are currently experiencing.

An outstanding and experienced feature

In the past 41 years, the experience of political groups and people in Iran shows that the most prominent feature of the Iranian regime is that they are not accountable to anyone and to the rule and law. In this regime, legal protest movements, peaceful demands, and legitimate legal pursuits by people or political groups opposed to the regime and critics of the regime are not tolerated and reach nowhere. And in its continuity, in addition to being eroded and abandoned, insisting on them leads to repression, imprisonment, exile, and deprivation.

The result of answering a few questions

The question is, despite the constitution, elections, government, parliament, and the judiciary, why is there no way to reach an agreement with this government?

And why is this government not accountable even to its own law and to any citizen, group or strata?

From these two questions, a third question arises that if the law and the rights and accountability to people and groups existed, would Iranian society on one hand and the state and sovereignty on the other, have been in such a disastrous situation?

If so, what is the reason for so many prisoners, executions, massacres, poverty, prostitution, unemployment, so many refugees and an endemic brain drain?

And what is the reason for all this militarization and espionage and all kinds of repressive and control apparatus and institutions?

This fact has now become apparent to the government itself, which, by failing to comply with all legal and peaceful means, has put pitted the entire country against the government. So much that it has become the main concern for the rulers and an existential threat to the regime. In response, the regime has set up broad repressive security and intelligence apparatus against the Iranian people.

The facts mentioned above force us to address the cause of this deadlock in reaching rights in a peaceful way in Iran.

The root of Iran’s political, social and economic crisis lies in the clerical rule of the Velayat-e Faqih principle.

Ruhollah Khomeini, the founder of the mullahs’ regime, said in a speech in Qom in 1980: “If I find that the majority vote is against Islam, I will stand in front of it” and “maintaining the system(regime) is a must” as well, “For which contracts with people can be canceled unilaterally.”

The obvious meaning of this is that Khomeini is a symbol of Islam and his name is synonymous with the word “Islam.”

Just like in the literature of the current government, the government describes the Mullahs as the “people” like:

“The opposition and the critics of the regime want to deprive the people of security!” “America’s goal by the cruel sanctions are the Iranian people!” “Iranian people demand severe punishment for the thugs!”

According to Khomeini’s theory, real people are children, and they lack the right distinction in politics, society, and religion. Khomeini’s inner circle, like the clerics Mesbah Yazdi and Hussein Taeb, have made this theory clearer so that all people, groups, and intellectuals can understand their task.

They have said that in every election, even when millions of Iranians participate, the final verdict is up to the leader of the Muslims and not the people’s opinion and vote.

In completing such a structure, one should point out the extreme hostility of the mullahs with women’s rights and their political, social and judicial rights. The hostility that has made the issue of women one of the most critical issues in social life and family.

Such a structure and basis of political-religious theory, whose religious and sacred aspect takes precedence over its political aspect, defines the historical and political nature and ideological identity of the mullahs’ regime.

In the sense of commitment and service

With this structure and foundation, all political (government and parliament), legal (judiciary and justice) and military (army, IRGC, and mobilization Bsiji) elements have been educated and trained. In addition to these two pillars, the state-affiliated clergy class has priority in this structure.

This political, military and religious structure has no commitment to the rights of the Iranian people, nor to the need for freedom of opinion, speech, and action, nor to social democracy. It has sworn to serve the Vali-e Faqih alone.

The mission of all its constituents is to preserve the regime in any way, including by squandering Iran’s wealth and strategic assets to ensure its continuity. Therefore, this structure is no different from the occupiers in several well-known invasions of the previous centuries. The only difference with the occupiers is in the seemingly Iranian identity of this tribe, which is also closely linked to the abuses of religion.

Such a structure is constantly confronted with foundations of social life, human civilization, and rights, human dignity (freedom of thought and choice), within and outside.

It is natural that when such a structure takes power, society is also plagued by tensions, challenges, and crises, leading to degeneration and decay.

In the sense of peace and violence

In this revision, it can be seen why the peaceful desires of the people and the opposition groups are always slaughtered by the sword of the absolute political and religious domination of Velayat-e Faqih. This can best be understood as the basis for the concept of anger and revolt and the inevitable rebellion to assert basic social rights and human dignity and the inherent right to freedom and democracy. 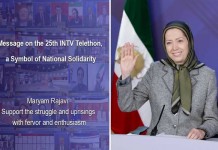