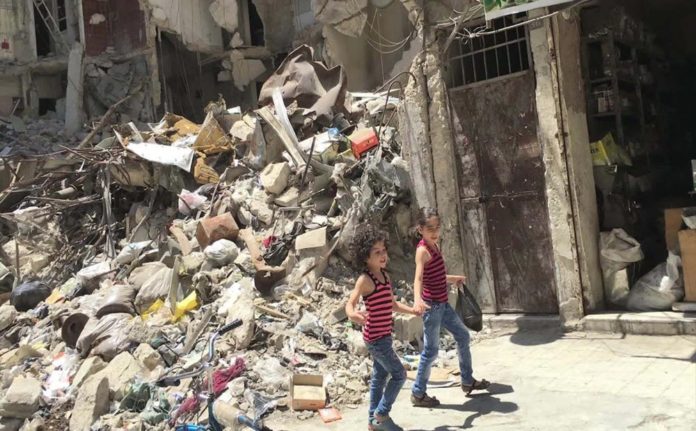 According to several reports, he has been contemplating such a move with top aides since mid-February.

Matthew RJ Brodsky writes in his article for the National Review that the Trump administration’s “confused messaging on Syria reflects a confused policy, in which strategy and objectives are not aligned to achieve an outcome that serves America’s best interest.”

Trump signed off on an updated strategy for Syria a few months ago. Five key objectives were laid out, that emphasized the need to contain Iran. Denying Tehran the Middle Eastern sphere of influence it covets, and preventing it from using Syria as a base to further destabilize and threaten the region was an important part of the strategy. This reflected Iran’s prominent position in the Trump administration’s National Security Strategy, released in December 2017.

This dissonance is found in General Joseph Votel’s prepared statement before the House Armed Services Committee in February. While the head of U.S. Central Command identified Iran as “the major threat to U.S. interests and partnerships in the Central Region,” during his testimony, in response to questions from Committee members he revealed that “countering Iran is not one of the coalition missions in Syria.”

Pentagon estimates put the loss of territory ISIS once held in Iraq and Syria at around 98 percent.The Pentagon’s own National Defense Strategy identified that, “inter-state strategic competition, not terrorism, is now the primary concern in U.S. national security.”

Brodsky believes that the “U.S. focus on counterterrorism strategies enabled and empowered dangerous adversarial states such as Iran and Russia at the expense of America’s position in the world. It’s a stark realization that should mandate an immediate shift in strategy, and the DOD knows as much: They didn’t bury the line in question in an obscure passage of the report; they stuck it on page one.”

He says further that, “Degrading Iran’s position, whether in terms of its nuclear plans or its effort to become a regional hegemon, should be America’s top priority in the Middle East.”

The U.S. should stop Iran from converting its areas of strategic depth into zones of control, and focus on preventing Tehran from strengthening Hezbollah and other proxies, according to Brodsky. America must also limit the creation of new missile-manufacturing facilities in Syria and Lebanon, and keep Iran from conducting nuclear-related weaponization experiments. The IAEA must be allowed to conduct vigilant inspections.

While Trump may want to limit the investment of American capital in, and avoid responsibility for, Syria’s reconstruction, the U.S. could work with the Sunni Arab states and anti-Iran militias already on the ground. Brodsky writes, “Tehran and its allies share a unity of purpose and benefit from Russia’s backing. Only American leadership can bring balance to this equation by unifying and leading the disparate forces that seek to prevent additional gains by our adversaries.”

A U.S. military presence in Syria opens up opportunities to prevent the an Iranian post-war order being imposed on the country. It would disrupt Iran’s logistical lines, including the land corridors used for moving weaponry. It may give Washington leverage in determining Syria’s future and prevent the return of ISIS.

Protecting America’s interests and those of its Middle Eastern allies, doesn’t allow for ceding the region to Iranian proxies.