State-run Iran Labor News Agency (ILNA) cites Aziz Sarani, who said that the water flowing from Afghanistan into Sistan and Baluchestan has been stopped, adding, “Deprived of the water flowing into the province, people have completely lost their only hope of cultivating the land.”

Shah bakhsh Gorgij, another representative of Sistan and Baluchestan to SCP, admitted that the only available water in some rural areas of the province is barely enough for “keeping people alive”. In fact, he said, many people are forced to drink water from ditches used by animals.

Sarani confirmed Gorgij’s comments. “The people in these areas use the water of hootaks (an open pond commonly used by animals). The water in these hootaks is badly contaminated,” Sarani said. “We recently learned that one of the villagers who had consumed the water of these hootaks had a leech stuck in his throat. Doctors had to operate on him to pull out the leech.”

The drought and the water crisis are most serious in the southern part of the province, bordering Pakistan. Sistan and Baluchestan, are mainly populated by Sunni Baluch (Baloch). Recently, sand storms and drought have significantly aggravated problems there. 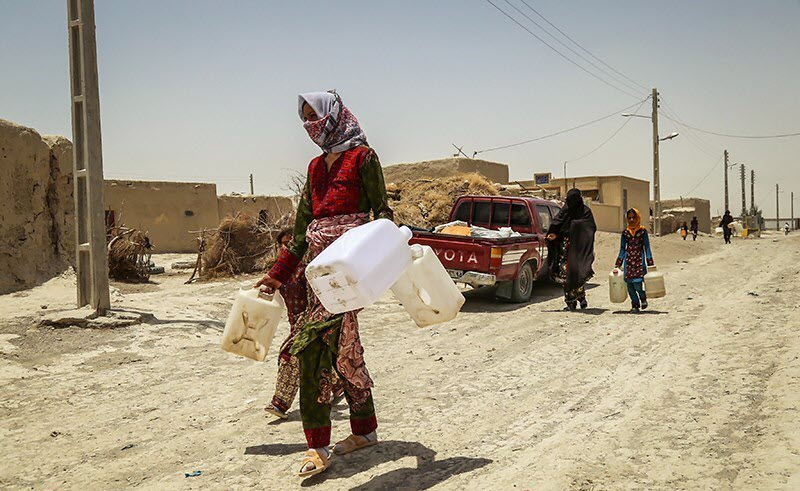 Villages near city of Zabol are in a critical situation because of “drought and dust storms”. Sarani insists that the situation for the residents of these villages has reached a “dangerous” and “life threatening” point. He explained, “Here in Sistan and Baluchestan, we are not facing the problem of people migrating from rural areas to suburban slums; we are witnessing people leaving the province in hundreds.”

Along with the shortage of potable water, Sarani has presented a list of shortages in the province, including, medicine and jobs. “The people of the province are so impoverished that their only income is 450,000 rial monthly government handout (roughly monthly $10 at official rate and $5 at free market rate).”

While Sarani has called on the government to immediately address these problems, the Iranian regime’s alleged mismanagement of water resources is believed to have largely contributed to the problem, and the Iranian people are already angry over the regime’s waste of money on meddling in other countries instead using it to benefit its own country.

In an interview with state-run ROKNA news agency on July 4th, Sarani claimed, “Lack of resources and religious prejudices in the province have forced many parents in villages near Zabol to let their daughters marry at early age of nine.”

Sistan and Baluchestan have a population of 2.5 million, which is mainly composed of the Sunni Baluch (Baloch), followed by the relatively large Shi’ite minority.

He said that decades of drought have wiped out agricultural activities across the province, “People used to farm, but this is no longer possible with the unending dry seasons. Since 2017, people have lost all their sources of income and they have no source of income other than the government’s aid.” He added that, “Nearly two decades of consecutive periods of drought have led to the crisis of dust and sand storms, bringing in respiratory illnesses, tuberculosis and shortness of breath.”

Sarani also noted, “If you walk through the streets at night and in the areas next to the cemeteries, you easily see people, including women, young boys and girls, sleeping in cardboard boxes, side by side a swarm of addicts.”